Check out from here to know how to get to The War Memorial of Korea and know what to do in there. By the end of the post, you will familiar about the war museum and ways of getting there.

WHAT things can you take away from here?

Other than this, you are able to get to know more about the Korean War history through artwork display, interactive stuff and 3D & 4D videos in the museum.

From this awesome museum, you can get a close distance to see the cool stuff like fighter planes, tanks, navy ships, bomber, helicopters, ancient car and many more.

So make sure spare some time to visit this huge museum in Korea. 🙂

Because it is one of the most popular places in Seoul Korea.

The War Memorial of Korea was built to pay tribute to those who sacrifice in the Korean wars. The museum was opened in 1994 and open to people for visiting.

You will discover some stone soldiers display at the outside of museum which they name it as “The Statue of Brothers” and “Defending the Fatherland statue”. Each stone soldiers serve as valuable meaning. “The Statue of Brothers” represents the elder an officer meet his younger brother in a battlefield and to show reconciliation, love, and forgiveness. The “Defending the Fatherland statue” represents the warriors who show their spirit and sacrifice themselves to protect their fatherland although suffering and injured caused by the war.

There are two main exhibition areas at the Korean War Memorial Museum which are outdoor and indoor.

Outside the museum, you will see different kind of large military equipment display such as fighting vehicles, combat aircraft, fighting ships, helicopters and other large equipment used during the Korean War. 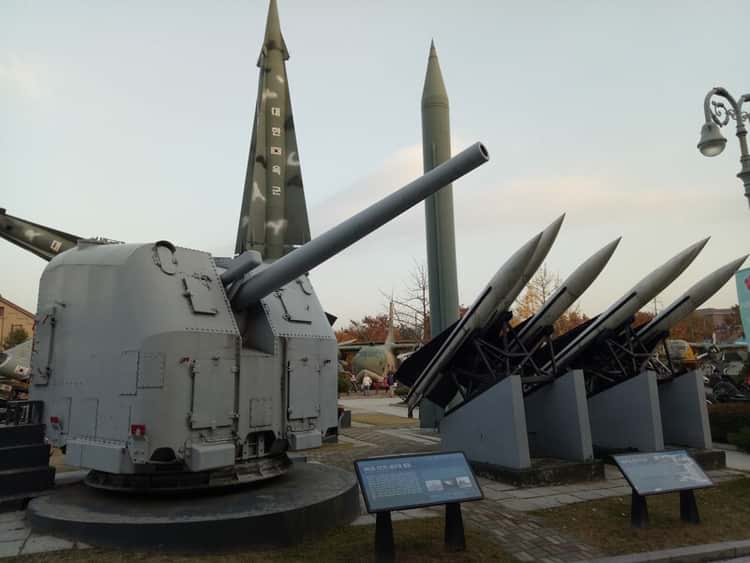 After visiting the outdoor exhibition, don’t forget to visit the indoor area.

Inside the museum, you can get better understanding about the Korean War through the artwork display and short movies.

The Screening room inside the museum will show the short movies and pictures to explain the progression of Korean War which is quite informative. In addition, indoor exhibition areas has displayed various kinds of defense equipment and weapons. You will see the bomber, machine guns, carbine, rifle, bullet and other weapons used by the army during the Korean War. 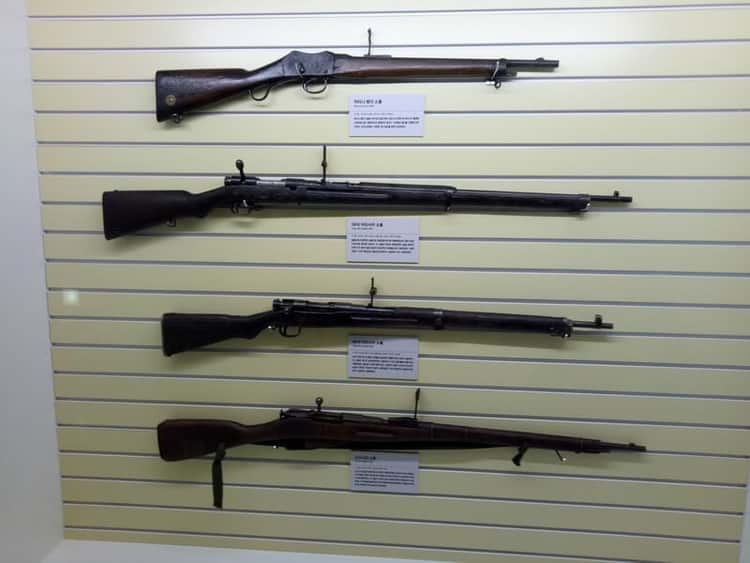 Apart from this, you also can get a chance to see the traditional cars that used during ancient time and also the motorcycle used during Korean War. So this is the amazing museum for you to know more about the Korean War history and explore the interesting military equipment, ancient cars and impressive monuments.

The War Memorial of Korea

One of the easiest way get to the Korean War Memorial Museum is taking Subway in Seoul Korea.

But Samgakji Station is the nearest station to the museum.

How do I get to The War Memorial of Korea from Namdaemun Market?

What’s the way to The War Memorial of Korea from Myeongdong?

How to go to The War Memorial of Korea from Dongdaemun?

Walking Guide to The War Memorial of Korea from Samgakji Station Firstly, go out from the Samgakji Station Exit 12 and there is a lift in front of you.

Then, walk along the road for about 4 minutes. After that, you will discover the museum will be on your left-hand side.

Getting to The War Memorial of Korea in Seoul via Taxi

Another method go to this museum is taking a taxi in Seoul.

If you worried about the communication problem with the taxi driver, you may prepare a picture of Korean War Memorial Museum with Korean wording of this museum name to show the taxi driver.

For example, the picture below … This may help them easy to interpret the location that you want to go.

You may consider taking Seoul City Sightseeing Tour Bus to The War Memorial of Korea if you like to explore the city of Seoul and reach there easily.

Taking hop-on hop-off sightseeing bus, you not only visit the War Memorial Museum but also can visit other popular places in Seoul with one time payment.

Below are the places that you can visit if taking the sightseeing tour bus.

If you prefer visiting The War Memorial of Korea at your own pace without rushing and need someone to guide you to there by using public transportation system, then private walking tour guide in Seoul may be suitable for you.

You can manage your time by your own and also get a chance to obtain valuable information from your tour buddy to make your trip meaningful.

The valuable information you can obtain from your tour buddy but not limit:

Other than this, you are able to choose English, Chinese or Japanese speaking tour guide to be your walking tour buddy to make your conversation easier.

Seoul Private Car Tour is suitable for those who has a family members with kids or elderly / group of friends that don’t want to waste time and energy finding the War Memorial Museum and other famous places in Seoul that wanna to go.

Taking the Private Car Tour can help you avoid worrying about using public transportation and able to reach your desired destination safety.

In addition, you can fully focus to enjoy the attractive places in Seoul and have fun on it.

In short, The War Memorial of Korea is a museum for you to explore small and large military equipment that used in the Korean War.

This is a place where you can learn more about the history of the Korean War through the interesting displays and videos inside the museum.

Thus, it is worth for you to allocate some time to visit this huge museum in Korea.

Have decided to use which transit mode to there? Share it in the comments below.

Lastly, wish you have a blissful holidays in Seoul!

How To Get To Namdaemun Market in Seoul? (Helpful Guide)