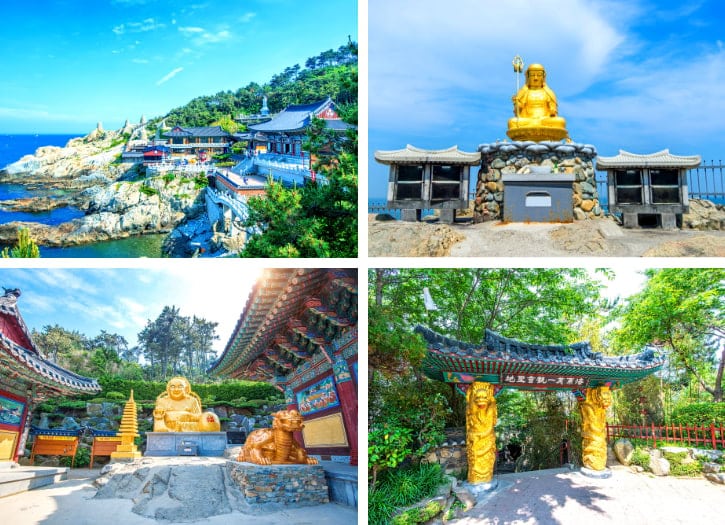 Haedong Yonggungsa Temple in Busan is more than just a religious temple. It is a mesmerizing attraction that sits along the coast of Gijang-gun. Because of its breathtaking location, the place is surrounded by panoramic sea views that elevate its beauty.

In this guide, I’ll share with you the step-by-step ways on how to get to Haedong Yonggungsa Temple. This will also include the 15 best sights to see during your trip.

1. Haedong Yonggungsa Landscape along the Coastline

The first thing that you should do is to capture the exterior view of the Haedong Yonggungsa Temple. Bounded by gorgeous coastal scenes, it’s easy to fall in love with the unique aura of the place.

Get mesmerized by the beautiful combination of blue and green hues that encircle the temple. And be in awe with the elegant structure itself that stands like a palace along the coast.

2. The Entrance of the Temple

As soon as you arrive at the main entrance of the temple, you’ll be captivated by the two standing golden dragon statues. This feature actually intertwines with the shrine’s history.

Centuries before, the head monk had an apparition of the Goddess of Mercy, who was then riding a dragon. That is why the temple was called the Haedong Yonggungsa, which refers to “Dragon Palace Temple” in Korean.

One of the famed spots in the complex is the Daeungjeon main hall. Built in the 16th century, this pivotal historical resource retained its original form even after many years.

Be captivated by the majestic design that features Dapo architectural style. Be sure you check out all the three compartments that make up this masterpiece.

A trip to Haedong Yonggungsa Temple won’t be complete without seeing the Seawater Great Goddess Buddha. Pay homage to the towering statue that was built in honor Haesu Gwaneum Daebu.

And if you look closer, you’ll see that the Buddha sculpture actually faces the sea. This relates to the belief that the goddess once lived in the ocean, riding on the back of her dragon.

Another must-see site is the Golden Jijang Bosal Statue. As a prominent figure among Buddhists in the country, the structure is a relevant part of the temple.

Capture this revered statue that sits grandly at the coastal section of the temple. And just behind it is the breathtaking ocean view.

Continue with your exploration and you’ll come across the Laughing Buddha statue. This is one of the many impressive figures within the temple complex. Take a snapshot of the statue that sits between two golden figures and implore for joyful blessings.

As you walk further into the temple vicinity, you’d see these Chinese Zodiac Animal Statues. There are a total of 12 stone sculptures that represent a zodiac sign.

These include a dragon, snake, rat, ox, tiger, rabbit, pig, rooster, goat, horse monkey, and dog. Uniquely, these figures are stationed along the entrance, making it easy to see them.

While strolling around, don’t miss these Mini Monks figures that are displayed at a certain section of the temple grounds. These adorable miniatures were purchased while some were donated by parents in return for their children’s successes.

So, if you spot this area, you may say a prayer and relay your intentions. Who knows, the goddesses and gods might grant your wishes!

One of the popular sights in Haedong Yonggungsa Temple is no doubt the 108 Stairs and Bridge. From the name itself, the number of stairs represents the 108 mind delusions according to Buddhism beliefs.

While going down, make sure you appreciate the scenic views from afar! You can stop at one step to capture the beautiful scenery and simply marvel at the surroundings.

10. Buddha of Granting a Son

If you want to conceive a male child, then drop by the Buddha of Granting a Son. This is a famous section among expectant mothers praying for a male gender for their kid. After saying your prayers, don’t forget to rub the belly of the statue for good luck!

Before descending the 108 stairs, you’ll catch sight of the Eight-Story Pagoda. And surprisingly, this gigantic structure is flocked by tourists who implore guidance for travel. So, before going home, make sure you pop by this remarkable figure and say your prayers.

On the other section of the temple, you’ll find a wishing pond located below a bridge. From above, offer your intentions and toss a coin. It is said that if you shoot the coin into the basin on top of the turtle, your wishes will come true!

13. Statue of Mother and Child

Just like other figures in the temple, the statue of mother and child is a famed spot in the complex. Many mothers visit this giant figure for divine intervention between them and their children. So, pay your respect to the religious statue and recite your own prayers.

14. Statue of Buddha for Academic Achievement

Get on with the adventure and see the statue of Buddha that is crafted for academic achievement. This is highly visited by students who want to pass their exams. So, if you want to excel in your studies, remember to stop by this statue.

Cap off your temple journey by seeing the Bodhidharma Monk and Dragon Turtle. These two are prominent figures that make up the history of the shrine.

Often than not, visitors believe that both statues are a symbol of good luck. So, grab this chance and appeal to the gods for your wealth, career, and health. Haedong Yonggungsa Temple captivates visitors because of its location. Unlike other religious sites, this is perched along the beautiful coastal section.

So, aside from seeing the unique spots within the temple, you’d totally love the scenic surroundings. Plus, the sea breeze perfectly complements the serene vibes of this famous destination. So, wander around the historical structures while also enjoying the gorgeous scenery.

How to Get to Haedong Yonggungsa Temple

Hop aboard the Metro Line 2 to Haeundae Station. From there, you go out of Exit 7 and take Bus No. 181 to Haedong Yonggungsa Temple. This is 19 bus stops away from the temple and would take about 33 minutes to reach the place. As to the cost, prepare 1,200 won.

Another way is to ride Bus No. 1001 from Exit 7 of Haeundae Station. Compared to the previous options, this is 13 bus stops away from the temple. Meanwhile, the travel time is around 30 minutes and the bus fare is 1,700 won.

For better reference, below are the detailed steps to go to the temple. 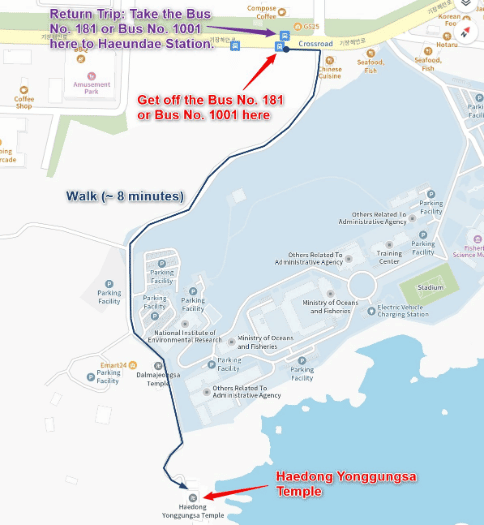 Step 2: Get off the bus at the bus stop that is close to the Haedong Yonggungsa. You may then walk to the temple for about 8 minutes.

Easiest Way:
Join one of the famous bus tour 1 or bus tour 2 in Busan. The bus tours can bring you the popular attractions in Busan with ease. These include Haedong Yonggungsa Temple, Gamcheon Culture Village, and Busan Skywalk. Therefore, you can actually visit all these tourist sites in one day!

Lotte World Busan: 14 Best Rides & How to Go There

Gamcheon Culture Village: Complete Guide & How To Go There

Haeundae Beach (Full Guide for New Visitors & How to Go)

6 thoughts on “Haedong Yonggungsa Temple: How to Go & Must-See Sights”