If you have doubt on how to get to Gyeongbokgung Palace by subway or other transportation services, then here are the helpful information which can help you to get there easily.

WHAT things you can get from here?

This is a great place for you to see the rich history palace with beautiful pavilion. Get a chance to stroll every corner of this historical building and catch up the Royal Guard Changing Ceremony. Don’t miss out this one of the famous places in Seoul!

Let’s get started to know more about the amazing palace and ways to go there …. 😉

Get to Know More About Gyeongbokgung Palace with Photos This palace was built in 1394 and it is the royal palace of the Joseon dynasty. It has 600 years of history and located in the bustling city of Seoul.

Most of the halls in this palace were burned up in 1592 due to Japanese invaders and after that restore back in 1867. 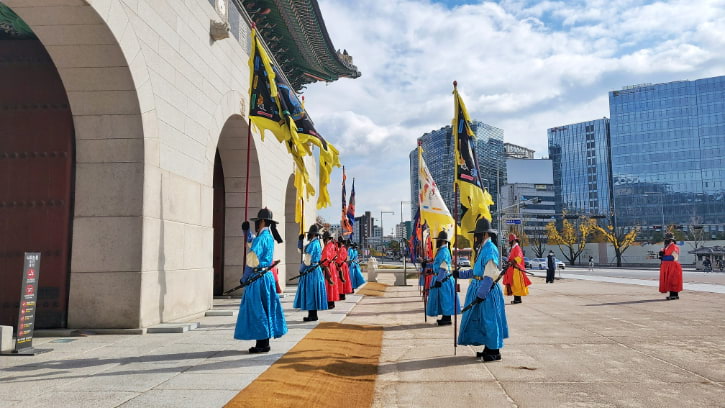 When visit in the palace, don’t forget to watch the Royal Guard Changing Ceremony which is a great chance to see the rare Korean traditional scene in front of you. You will see the guardsmen wearing in traditional costumes who carrying traditional weapons and perform the changing of guards at the palace.

There are many halls with one pavilion and each hall serve as different purpose during Joseon dynasty.

Geunjeongjeon Hall was built in 1395 and is the largest hall at this palace. But the hall was destroyed in 1592 when Japan invasions of Korea. After that, the hall was reconstructed in 1867. Here you can see the hall was used by King to held meeting, official functions, grand celebration and met foreign representative. Donggung is the place where the crown prince and his wife were living.

Gangnyeongjeon Hall was initially constructed in 1395 and built by King Taejo. The hall was destroyed in 1592 when Japan invasions of Korea and then rebuilt in 1867. In 1876, the hall was destroyed by a serious fire and rebuilt again by the King Gojong. This is the place where you can get to know the living and resting area for the King.

Jagyeongjeon Hall was constructed in 1865 but was destroyed twice by fire and reconstructed in 1888. The hall is mainly used by Queen Sinjeong who was the mother of King Heonjong.

Sajeongjeon Hall is the place where the king to carried out his duties of ruling the nation with his ministers during Joseon dynasty. Hyangwonjeong Pavilion was constructed in 1873 by the King Gojong. The pavilion was built in two-story hexagonal shape and connected with a bridge named Chwihyanggyo.

Things You Need to Know Before Going to Gyeongbokgung Palace

Nearby Attractions (by Walking) Cost-effective Way to go to Gyeongbokgung Palace by Subway If exit at Gwanghwamun station, it will take you about 8 minutes to reach the palace by walking.

Below table shows the summary of subway information to help you go to the historic palace.

How to go to Gyeongbokgung Palace from Myeongdong?

How to reach Gyeongbokgung Palace from Hongdae?

How to get to Gyeongbokgung Palace from Dongdaemun?

Which subway line goes to Gyeongbokgung Palace from Seoul Station? When you go out from the Gwanghwamun Station Exit 2, walk straight until you get to see the front gate of Gyeongbokgung Palace.

As you walk straight, you will pass King Sejong Statue on your left and another white building on your right. After that, you will notice the road sign board showing left arrow for Dongnimmun and right arrow for Angukdong Jct in front of you. Then, the National Museum of Korean Contemporary History will be on your right.

Soon you will spot the front door of Gyeongbokgung Palace after pass by National Museum of Korean Contemporary History.

It takes about 8 minutes walking from Gwanghwamun Station Exit 2 to Gyeongbokgung Palace. Getting to Gyeongbokgung Palace in Seoul by Taxi

Taking a Seoul taxi to the palace in Seoul is very easily although you have a language barrier. If want to know more about Seoul taxi information and fare, may check from the Official Site of Korea Tourism.

One of the way to deal with the taxi driver to bring you there is showing the Gyeongbokgung picture with Korean wording like the picture below.

Another way go to Gyeongbokgung Palace is taking Seoul City Sightseeing Bus to save your time to look for the subway station and get there easily.

By joining the hop-on hop-off bus tour, you are able to visit the popular places in Seoul like

Other than this, you are able to get on and get off the bus as many times as you like with no extra charges.

If interested in Ginseng, Amethyst and Jogyesa Buddhist Temple, then you may consider joining Group Tour. Due to these places are NOT covered by joining Sightseeing Tour Bus.

This Group Tour will bring you to the popular destinations in Seoul included this palace, temple and market.

Places will cover by the Group Tour are

In addition, it has included lunch, admission fee, hotel pick-up and drop-off services which is convenient for those who don’t like to deal with the subways stations, public buses and ticketing.

The group tour either organized by van or bus, it depends on that day whether have many people to join the group tour or not. If lack of people, it may provide van.

You may consider taking the Seoul Walking Tour Guide, if you want to experience the public transportation in Seoul but don’t have time to do research on how to use it to reach the rich history palace.

By taking this private walking tour, your tour buddy will accompany and guide you go the palace by using the public transportation in Seoul.

Apart from this, you can fully in-charge your schedule to decide the meeting point and popular places that you want to visit. Your tour buddy even can go to your hotel to meet up with you and go together to the historical palace.

In addition, you are able to choose English, Chinese or Japanese speaking tour buddy to be your Seoul information provider.

If you don’t have budget problem and want to walk less to avoid navigating the public transportation system, then you may consider booking Private Car Charter to bring you to rich history palace and other places that you interested to visit in Seoul.

Taking Private Car Charter can give you full flexibility of time and bring you to the exact location.

In addition, this car tour also suit for groups of friends and family members with baby, kids and seniors who are not convenient to walk a lot.

This car tour also can help you eliminate of wasting time to find the way to go to Gyeongbokgung especially don’t have enough time to do research before going there.

Gyeongbokgung Palace is a place to allow you explore the very long historical palace during Joseon dynasty time. There are many halls in Gyeongbokgung where you can go to observe it.

In addition, don’t forget to catch the Royal Guard Changing Ceremony at there. It’s really a rare chance to see the Korean guardsmen who wearing Korean traditional costumes and carrying weapons to perform changing of guards at the palace.

Check the information above to know more about Gyeongbokgung Palace and methods of getting there.

Which transport mode you will likely choose to reach Gyeongbokgung? Share with us in the comments below.

Would you like to know my highly recommended place to stay in Seoul? Convenient for shopping, eating and near to Subway station.

You can read here to know more!

Lastly, wish you have a wonderful time at Gyeongbokgung Palace and happy holiday! 🙂

How To Go To Insadong in Seoul & What To Do In There?